Re-introduction of Automotive Tariffs in Egypt 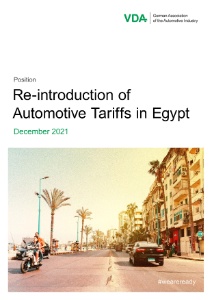 PDF 1,07 MB
VDA supports the development of the economies and especially the automotive industries in Africa. The establishment of the African Continental Free Trade Area (AfCFTA) and trade and investment agreements with Europe and other countries and regions will support all countries in developing their industries. In the long run, local production will increase due to market growth and the development of the Pan-African Market through the AfCFTA. The establishment of a common market with uniform rules of origin will provide further incentives to invest in Africa. For emerging economies like Egypt, special incentives might be helpful to promote the de- velopment of the economy and local investments. But they should not discriminate against the important trade partner EU and raise new trade barriers. VDA believes the reintroduction of tariffs towards the EU would be an inappropriate instrument to attract investments. Egypt should refrain from such a measure.